Following this year’s developments in Travel has really kept us moving! Hopefully, you’ve created some of your own new travel memories this year too.
These are some of the most tremendous changes that have taken place in the past 12 months that will affect travelers for years to come.

It was over two years ago that severe hurricanes swept through some of our favorite Caribbean travel destinations. The hard-hitting storms destroyed buildings and roads, and electricity and water infrastructure, uprooting people’s lives and livelihoods, and sadly even taking lives. Local communities are still recovering.
Countless hotels and resorts suffered damage and were forced to close. For communities whose economies rely on tourism, it’s been a very tough time indeed.
In the last year, we’ve seen a surge of re-openings. And happily, in some special cases, there’s even been a silver lining, with hotel and resort companies taking the opportunity of hurricane damage to re-imagine resorts in spectacular new style.
More landmark openings include 2 new cruise line private islands in the Caribbean region in 2019, too, with Royal Caribbean’s ‘Perfect Day at Coco Cay’ and MSC Cruises’ Ocean Cay Marine Reserve joining the beach resorts where cruise lines extend their signature shipboard experiences to a tropical resort setting.
Plus Singapore's Jewel Changi Airport (pictured, top), with a 7-storey 'Rain Vortex' through an oculus that features in water, sound and light shows, acres of gardens and interactive areas like Forest Valley and Canopy Park, redefining airports globally as lifestyle hubs for locals and visitors as much as transportation stations.

Some blame goes to overcrowding, some to Tourists Behaving Badly. A number of iconic travel destinations closed their proverbial doors to visitors this year, or significantly changed how travelers will now be allowed to experience some of the world’s most treasured sites. You’ve likely heard about cities like Amsterdam, Dubrovnik, Venice and Barcelona enacting new restrictions. But more remote places like Machu Pichu are feeling the pressure too, and governments are responding to protect historic and natural sites and wildlife.
High profile examples in 2019 were Australia’s Uluru and Indonesia’s Komodo Island.
You can still watch sunrise or sunset at Australia’s breathtaking red stone monolith, Uluru (formerly known as Ayers Rock). But as of this past October, no more climbers are allowed to make the steep trek to the flat top. Uluru is sacred ground to the country’s aboriginal peoples. They have been asking for years for visitors to stop walking upon it… but hikers kept coming, some even stealing pieces of rock and posting disrespectful selfies. A ban on hiking the rock has now taken effect. Now, visitors can see and hike Uluru’s park at ground level, and have the opportunity to participate in aboriginal spiritual experiences. 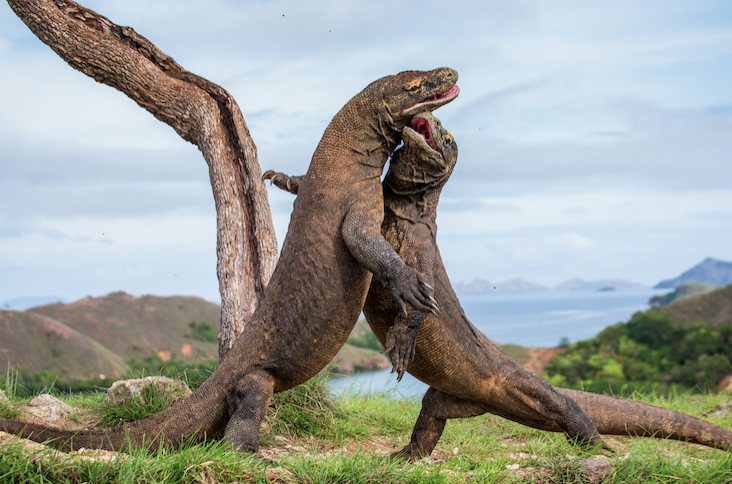 Indonesia’s Komodo island is home to the world’s largest, most pre-historic-looking and eerily meat-eating lizard, the Komodo ‘dragon’. It’s the only place in the world to see them in their natural environment, but theft of dozens of live animals for sale on the black market has jeopardized the stability of their population – and wrecked it for everyone else. Indonesia’s government has banned visits for the foreseeable future.
Other closures include the Chinese side of Mount Everest’s Base Camp, due to literally tons of garbage left at the sensitive site, and Maya Bay in Thailand’s Phi Phi islands, made famous by the movie The Beach, that attracted a tidal wave of visitors who have nearly destroyed its delicate marine ecosystem.
Expect to see more restrictions as local communities balance sharing their treasures with visitors, and preserving them for generations to come.
A big dose of humble, respectful, and responsible behavior from travelers is needed to continue to have access to the wonders we hope to experience in person.

When it comes to cruising, the hits just keep on coming. As recently as November, another mega-ship, the Norwegian Encore, has joined the fleets sailing all the seven seas. It’s just the latest in a string of jaw-dropping new ships in 2019.
Two of those new ships may be cruising game changers.
AmaWaterways’ new AmaMagna has upended the river cruise ship format. Its ‘double wide’ design allows for an unprecedented amount of space and amenities unheard of previously in river cruising.
Scenic’s Eclipse is not only the first ocean-going vessel for the luxury travel company that made its name in land tours, followed by a fleet of sleek, ultra-luxury river cruise ships with its signature, sophisticated black and gold styling. It was designed to join the small but growing club of luxury expedition cruise ships, coming equipped with 2 helicopters and a submarine to explore all the ocean regions of the earth.
A host of new hotels arrived on the global travel scene in 2019 too. Perhaps none made more of an impression than the standout – literally – Seminole Hard Rock Hotel & Casino in Hollywood, Florida shaped like an actual guitar!
﻿ 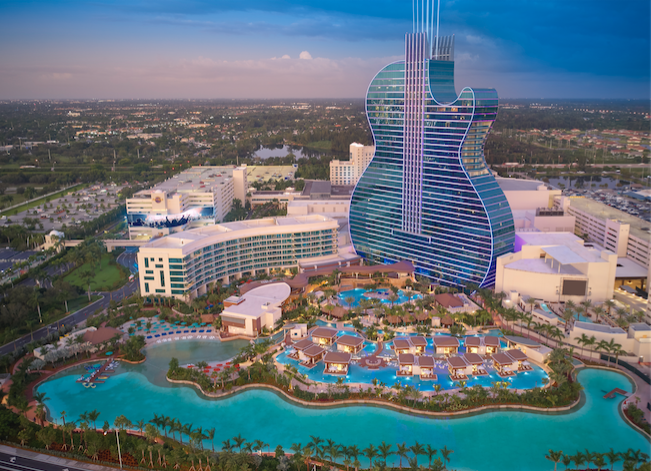 Can you believe commercial flight has already been here for a century? The 20th century advanced flight at nearly light speed, from the Wright brothers’ first flight in 1903, to the inconceivable feat of putting the first man on the moon only decades later in 1969.
In 2019, the world was celebrating the 50th anniversary of the Lunar Landing as well as the 100th anniversaries of the world’s first commercial airlines, KLM and British Airways. And watching closely as a number of companies attempt to make commercial space travel viable.
2019 was also the year cities in Latin America started commemorating half a millennia of European settlement. Cities like Havana, Cuba, Panama City, and Veracruz, Mexico marked their 500th anniversaries with bittersweet celebrations that marked not just historic and proud achievements, but also the losses suffered through European colonialism. That balanced perspective will no doubt continue as more and more cities mark this milestone throughout the Americas. 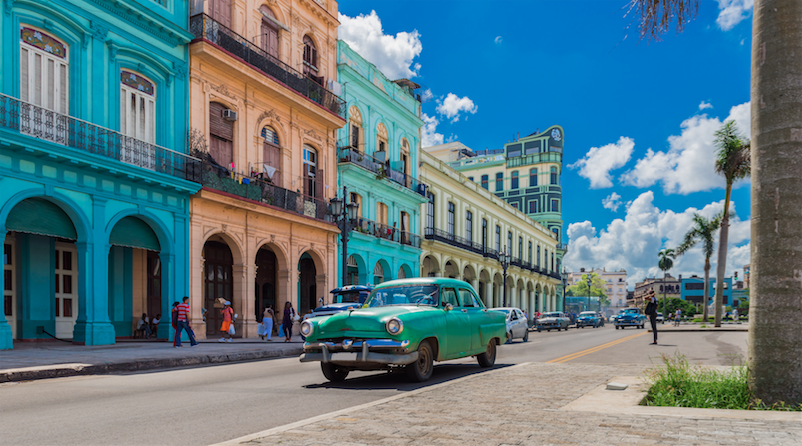 What Trends Shaped Travel in 2019

You’re going to be hearing more about Multi-Gen (grandparents, aunts, uncles, parents and kids) and ‘Skip-Gen’ (grandparents + grandkids) travel. Families traveling together is nothing new. But as distances between generations grow, and more people recognize the value of experiences over things, more generations will commit their precious time and budgets to coming together to experience the world. And travel companies will design more innovative tours, resorts, ships and experiences to cater to everyone in the family.
Cruising continues its meteoric rise as the fastest-growing travel style. But one style of cruising especially is taking off. Expedition cruises, to polar and remote regions of the world, and especially luxury expedition cruising, is capturing the travel imaginations of a growing audience of port collectors, adventurous cruisers, and luxury travelers who have already ‘been there’.
Taking care of people and the planet has never been more important, and the travel industry got the message in a much bigger way in 2019, with many travel operators and cruise lines announcing they’re taking small steps like banning single-use plastics, as well as bigger steps like advanced, eco-friendly technologies, as well as socially responsible and locally-sensitive operations that reduce travel’s footprint on the planet and benefit local communities.
And taking care of yourself. Active and wellness travel offerings expanded in 2019 as travelers continue to commit to a more healthy lifestyle, show interest in enjoying destinations actively, not just passively from a tour bus, and look to enhance their mental, physical and spiritual well-being while being inspired by the culture and landscapes of the world’s most alluring places.
Wishing you a new year of joy in travel!
Lynn Elmhirst, Producer/Host, BestTrip

Copyright BestTrip.TV/Influence Entertainment Group Inc or Rights Holder. All rights reserved. You are welcome to share this material from this page, but it may not be published, broadcast, rewritten or redistributed.

Hike Europe's Most Famous Ancient Trail During This Jubilee Year

Only once or maybe twice a decade, the Camino de Santiago becomes an even more remarkable hiking journey through Spai... learn more

Better Sleep is the Travel Trend We Need Right Now

Is your New Year’s resolution to get more rest – and travel more? The good news is that there are travel experiences ... learn more

Science Says These Are the Most Beautiful Places in the World - Are They Already on Your Travel List?

Beauty is in the eye of the beholder, they say, but can you rank places that practically every traveler finds beautif... learn more

Let Us Help You